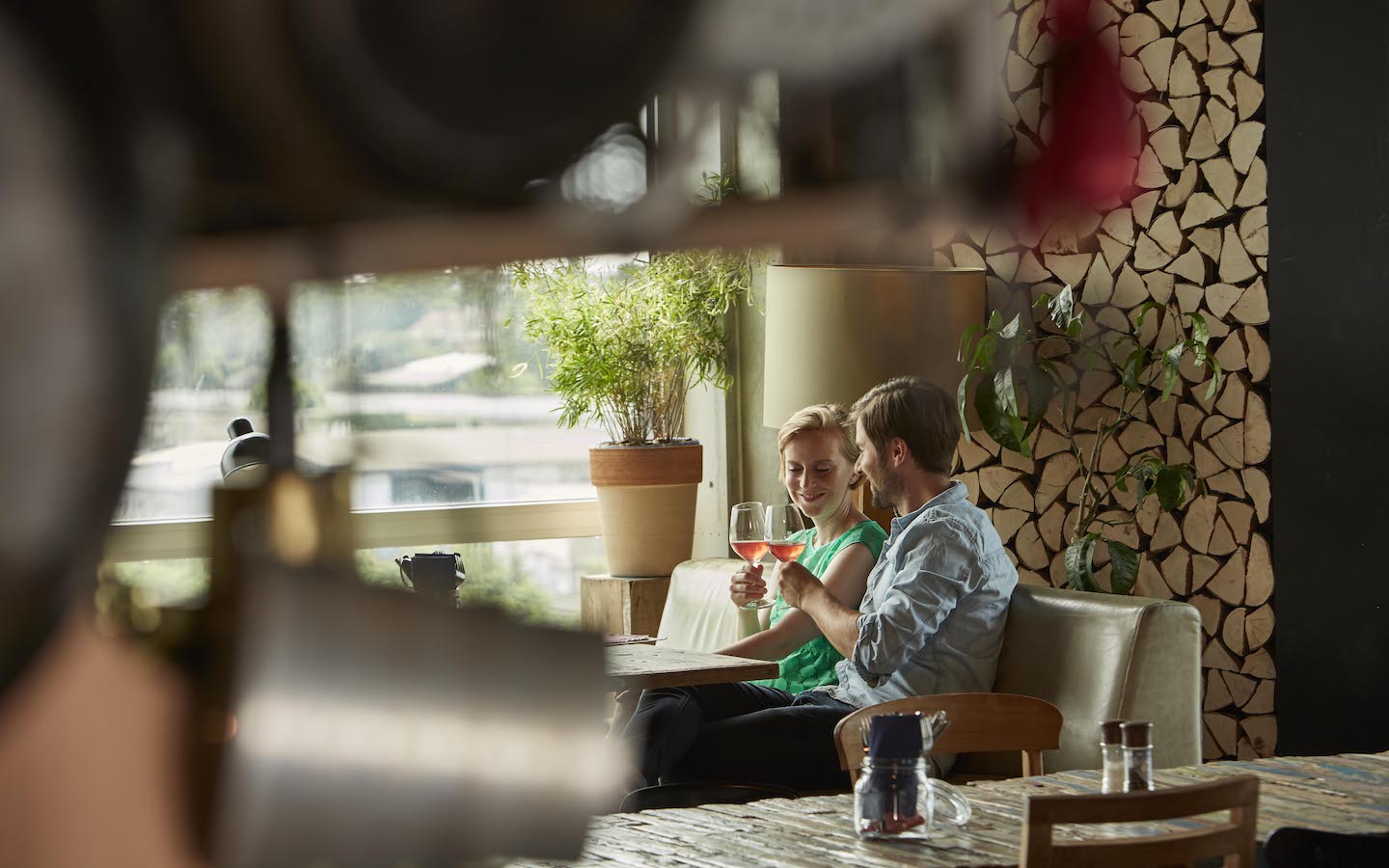 Mannheim restaurants - the taste of the city

People from over 170 nations and the Palatinate right outside the kitchen door. With six Michelin stars, regional and international ingredients, Mannheim has become the culinary capital of the Southwest and offers a unique gastronomic experience. From the finest of fine dining to funky street food, home cooking to "spaghetti ice cream" - invented in Mannheim, where ideas boil hotter than anywhere else. 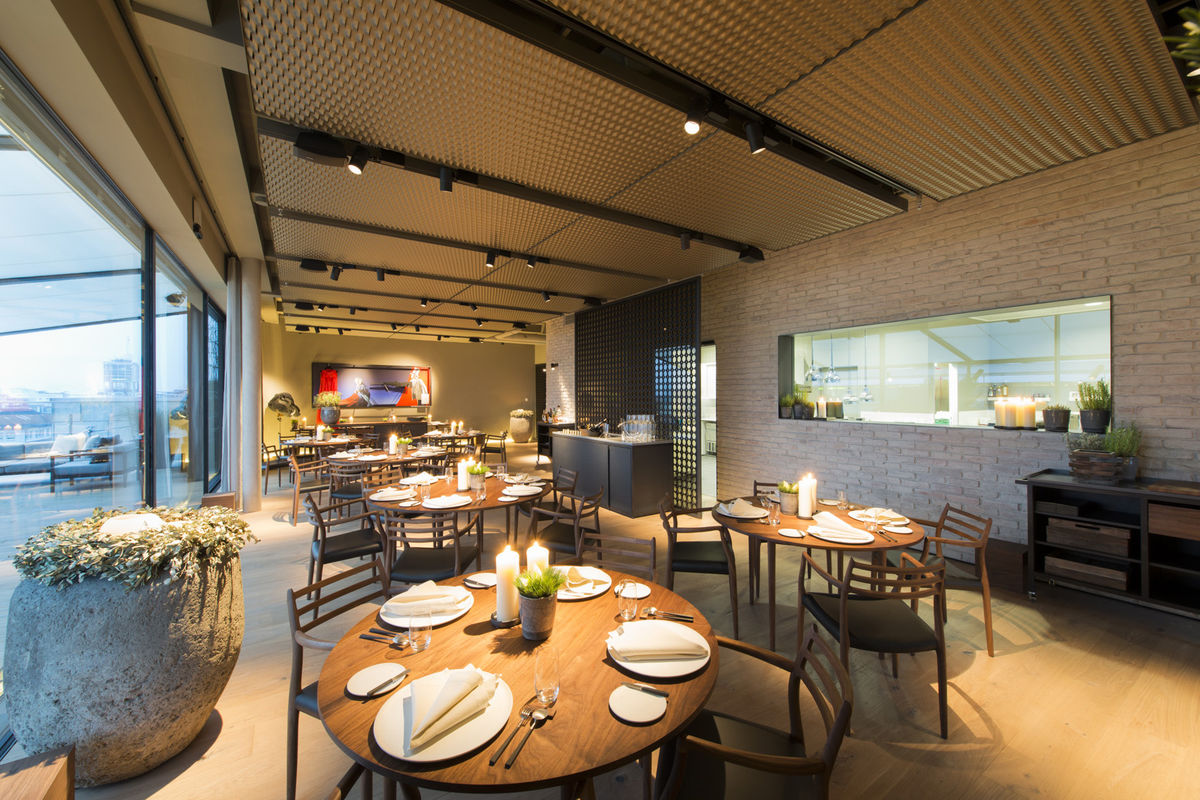 Six Michelin stars within just a few minutes walk of each other? This is normally the domain of metropolises like New York. In fact, Mannheim is reminiscent of the city on the Hudson.
The 144 squares between the Rhine and the Neckar, like the blocks of Manhattan, invite you on a culinary journey around the world.

Right in the heart of the city, in square O 5, you will find Tristan Brandt, the youngest 2-star chef in Germany. He offers gourmet cuisine on a world level in the restaurant Opus V, using fine regional ingredients and wines from the nearby Palatinate. Under the same roof, Dominik Markowitz produces Michelin-starred fish dishes of the highest quality at Le Corange. With his modern interpretation of classic French cuisine, he succeeded in earning his first star at the end of 2017. Only a few hundred metres away is another Michelin-starred restaurant and local institution, Dobler's.

On the banks of the Rhine, in a former granary, Palatine native Gregor Ruppenthal at Restaurant Marly has cooked his way to a Michelin star with his creative, Mediterranean-inspired cuisine. Next door, in the boutique hotel Speicher 7, Mannheim restaurateur Jürgen Tekath has set up a tapas bar that feels as urban as his Francophile Café Flo by the "Wasserturm". Under the arcades of the Art Nouveau Friedrichsplatz, a gastronomic catwalk has emerged - with restaurants and pavement cafés such as the Dolceamaro. 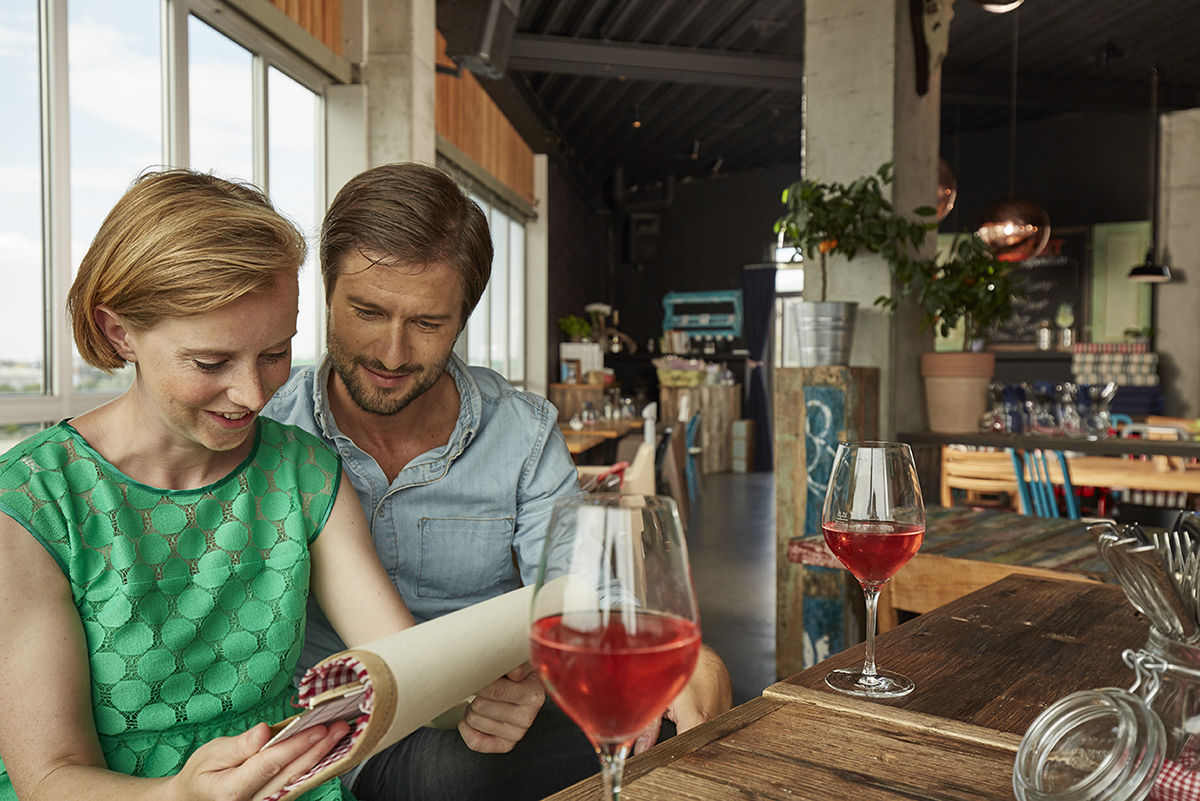 The Wasserturm marks the start of the Mannheim "Fressgasse", in which restaurants, snack bars and delicatessens have anchored a basic level of trust in the DNA of Mannheim.
There is always something good to eat here - from "Curryworscht" to the finest "bistronomy", as offered by Mannheim native Dennis Maier in Q 6 Q7. In the basement of this new shopping mall, Maier has created an air of informal dining enjoyment in an urban ambience with his restaurant "Emma Wolf since 1920" - awarded one Michelin star by the Michelin Guide.

The harbour district of Jungbusch is home to the city's creative and music scene and really comes alive at the weekend. You can get a good sense of the area from the rooftop restaurant "Die Küche", which offers a magnificent view across the harbour to the hills of the Palatinate. Great burgers can be had at St. James or the Henriette Burger Bar. Alternatively, grab some fab vegan food at the "Kombuse" before dancing at the "Onkel Otto Bar". All that remains after that is to end the night in Mannheim's most legendary location: the Greek restaurant "Rhodos", where things only really get going when everything else is winding down. 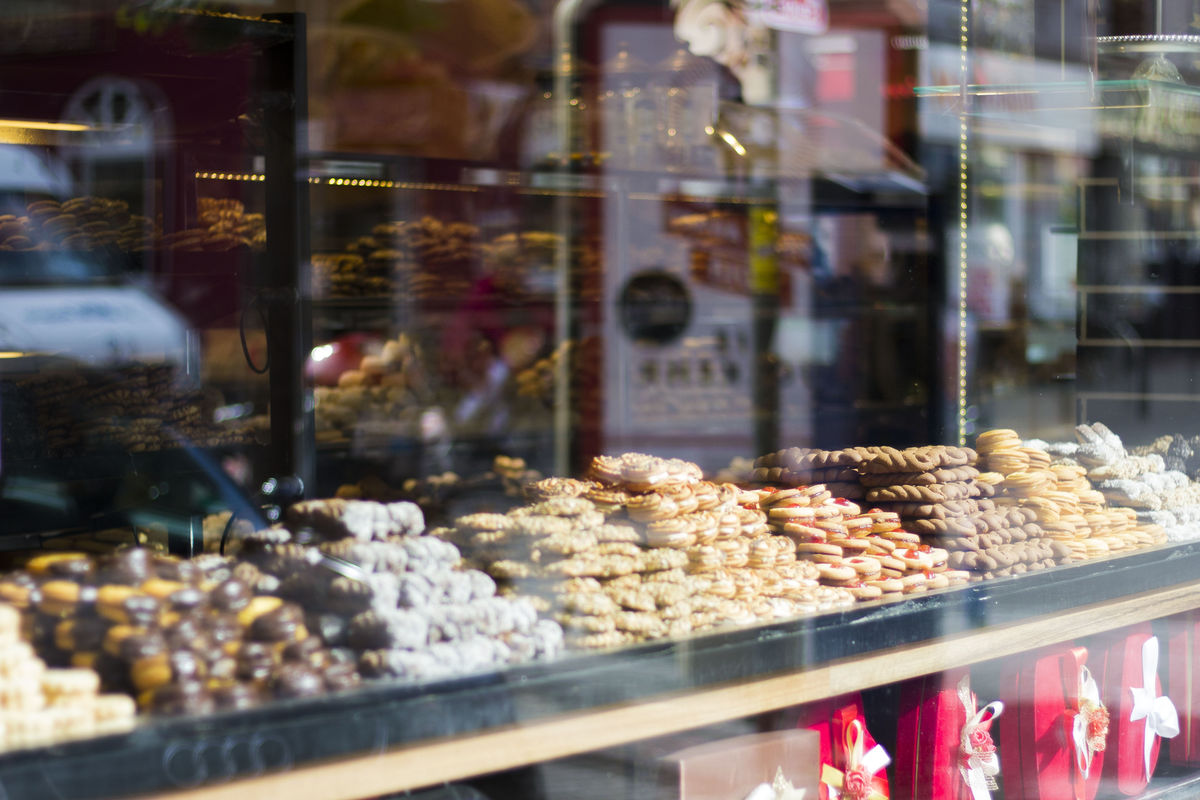 Back in the 1960s, Italians were the first "guest workers" in Mannheim. Today they characterize the culinary dolce vita of the city: with authentic cuisine in numerous restaurants such as Franco Pizzarelli's L'Osteria Vineria in the squares, the classic Milano on the Luisenring or the Osteria Limoni in the Neckarstadt-Ost district - complemented by many good pizzerias.
Don't miss trying "spaghetti ice cream" in Fontanella's ice cream parlour - the legendary invention of Mannheim ice cream maker Dario Fontanella.

The döner takeaway was yesterday. Today, the Turkish-influenced quarter in the I and H squares around the "Marktplatz" reflects the modern lifestyle of Istanbul, with hookah bars and restaurants such as Istanbul or Lale. A treat for the palate and the eyes are the baklava displays of Turkish bakeries like Taksim or Saray. There are said to be some Mannheimers who would emigrate without the Taz Firin Uzun, where Nursemin Uzum bakes Pide and Lahmacun in the stone oven according to ancient Anatolian tradition. Many national cuisines have their home in Mannheim. This started with the restaurant Akropolis on the Luisenring, where guests have been able to enjoy Greek specialties from the charcoal oven and meet Mannheim celebrities into the small hours since 1955. Then there are sushi restaurants like the Tokyo Sushi Bar, which would be counted as outstanding in Japan. You can also get possibly the best veal schnitzel outside Vienna at the "Pinzgauer Stubn".

And then, of course, there is Thai, Korean, Indian, Persian, Arabic, Mexican... Street food snacks can be found in almost every square in Mannheim. The Mannheim food-on-the-go culture has tradition as well as its own special features - like the white pretzel huts in the city centre. 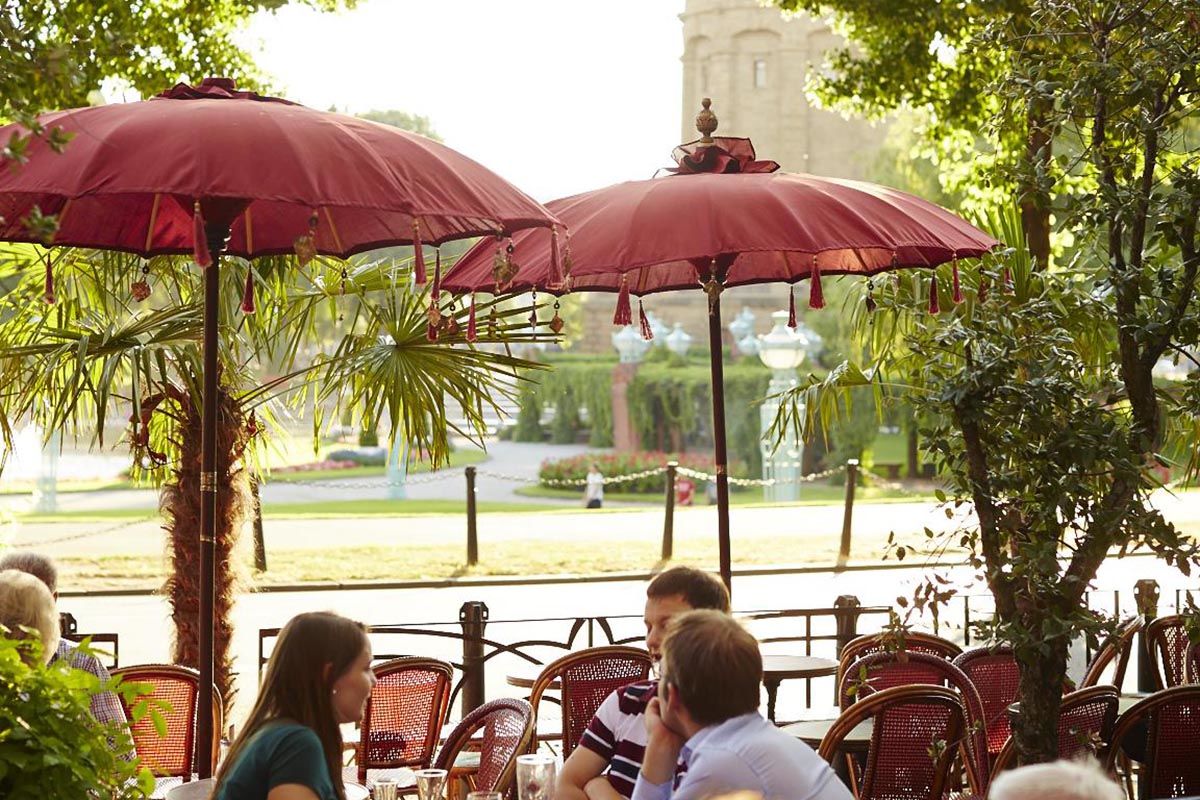 Cafe with a view of the water tower © Stadtmarketing Mannheim GmbH, Daniel Lukac

Local Mannheim cuisine represents a tangible mix of different regional traditions. You can experience it in its purest form in the rustic local eatery "Hemmlein", where Mannheimers of all generations meet. On the hand-typed menu you will find "Fleischkäse", a sort of smooth meat loaf, which was a Mannheim invention. It was first created in the 18th century by a master butcher in Elector Carl Theodor's court kitchen.

Mannheim is a city on two rivers and this can also be celebrated. The "Gasthaus Rheinterrassen" offers regional cuisine and a beautiful beer garden directly on the Rhine, while in the Rheinau district the restaurant ship "Heimat" is a unique experience. Mannheim's coffee culture is a world unto itself. Atmospheric locations like the Café Prag near the Town Hall could have sprung from a Kafka novel. Then there are neighbourhood cafés such as Fräulein Schiller in the squares or Café Pfau in the Neckarstadt district, or breakfast cafés like Café Meerwiesen in the Lindenhof district or the Blum Coffee Bar, which has become famous for its homemade cakes. 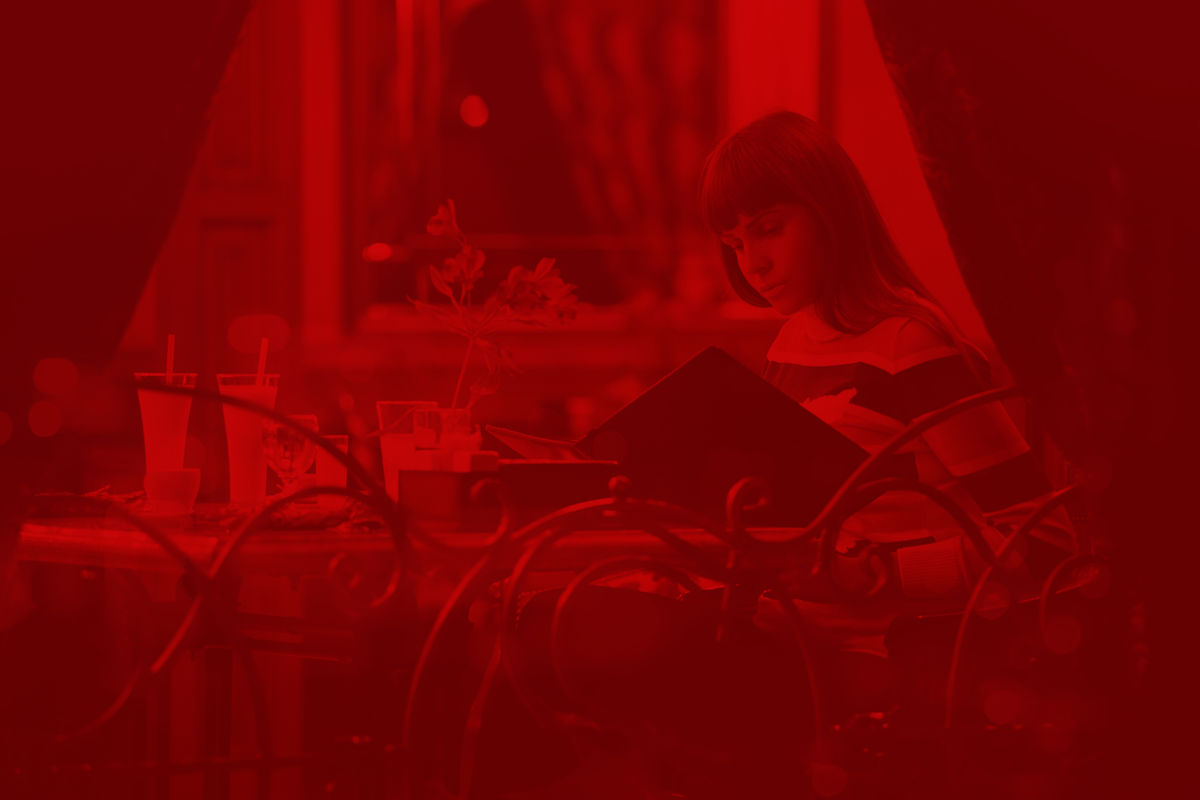