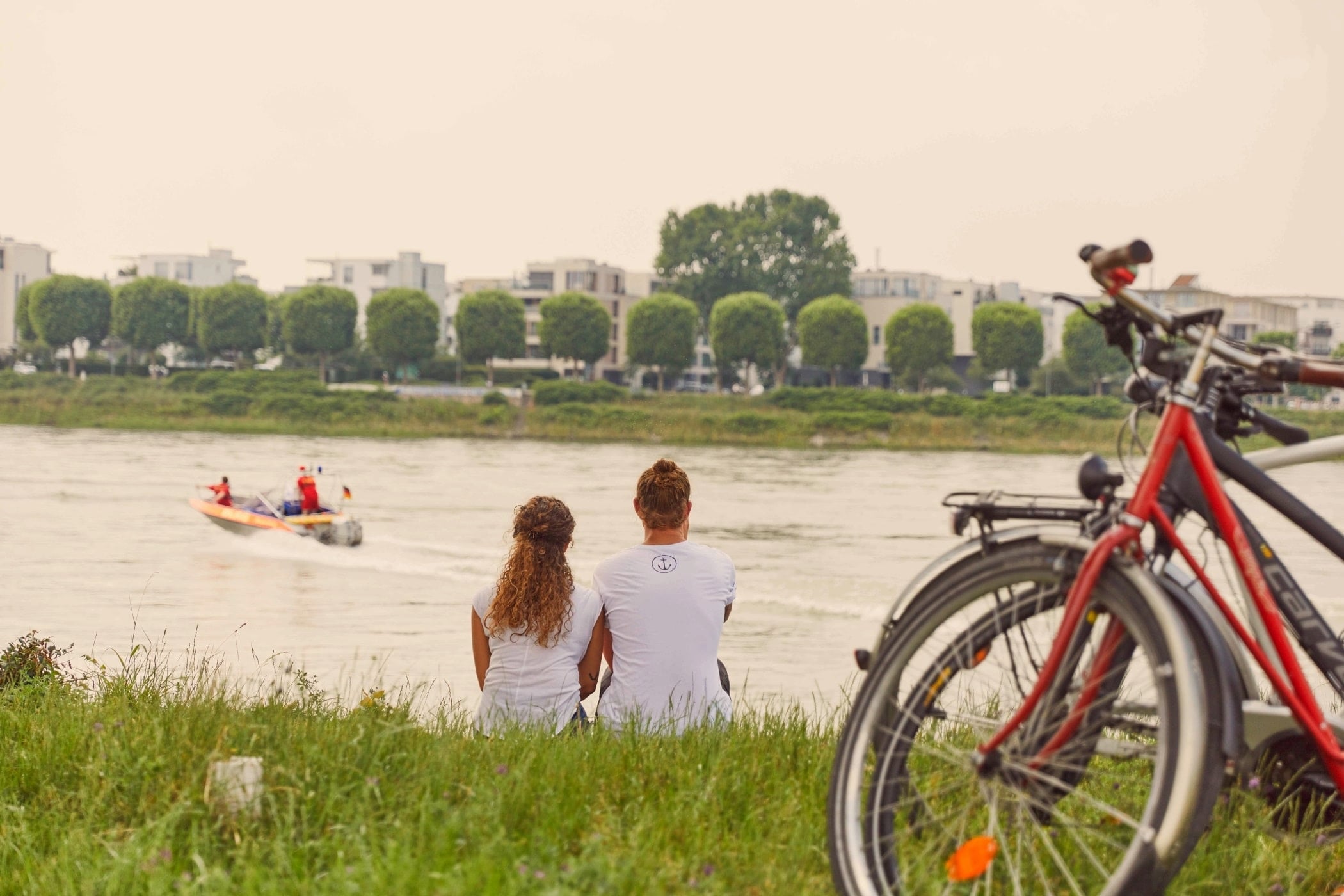 Exploring Mannheim from the saddle is a wonderful way to get to know our city better. For which city is better suited for this than the one in which the bicycle was invented? So get on your bike and experience Mannheim on three varied tours: past the most exciting sights, in the footsteps of Karl Drais, the inventor of bicycles, or through forests and alongside the rivers Rhine and Neckar.

Across the flowering Friedrichsplatz at the water tower, through the picturesque Oststadt district including the Luisenpark, along the green Neckar promenade, and on through lively Jungbusch to Mannheim’s baroque castle – this sightseeing tour takes in the very best of Mannheim. The route takes you through the squares and connects all the most interesting sights.

The starting point is Mannheim’s main station, from where you can already catch a glimpse of the city’s most famous landmark: the water tower. Surrounded by Germany’s largest contiguous Art Nouveau complex, the Friedrichsplatz is dominated by bright flowers, lively water features and sandstone-coloured buildings. Just a short distance from the Rosengarten conference centre, you will find yourself in the Oststadt district – with its venerable villas and tall trees, it is a real gem. Mannheim’s largest Protestant church rises in the heart of the Oststadt: the imposing Christuskirche.

The tour then takes you through Luisenpark to Mannheim’s next landmark – the almost 218-metre-high telecommunications tower. Its observation deck offers you the best view over the city of squares, while the revolving “Skyline” restaurant invites you to enjoy a little refreshment.

Back in the saddle, the tour continues along the busy Neckar and past the Herschelbad towards the Koncordia church, built in 1706, before heading into the colourful hustle and bustle of the squares. From the lively market square, you can quickly reach what is affectionately known as “Little Istanbul” with its many Turkish shops and restaurants. A short distance further, in the creative trendy Jungbusch district, you can admire the old buildings of the harbour district and make a detour to the famous Pop Academy. Along the Jungbuschpromenade you will pass the old ice rink – birthplace of the ice “Mannheimer Adler” hockey team – to the historical observatory and from there directly to the four exhibition halls of the Reiss-Engelhorn museums. Nearby you’ll also find the Jesuit church and the adjacent Schillerplatz, at the edge of which pretty cafés await you with a delicious piece of cake. The courtyard of Mannheim Baroque Palace is the last stage of the sightseeing tour, which takes you through the palace garden and back to Mannheim central station along the Rhine promenade. 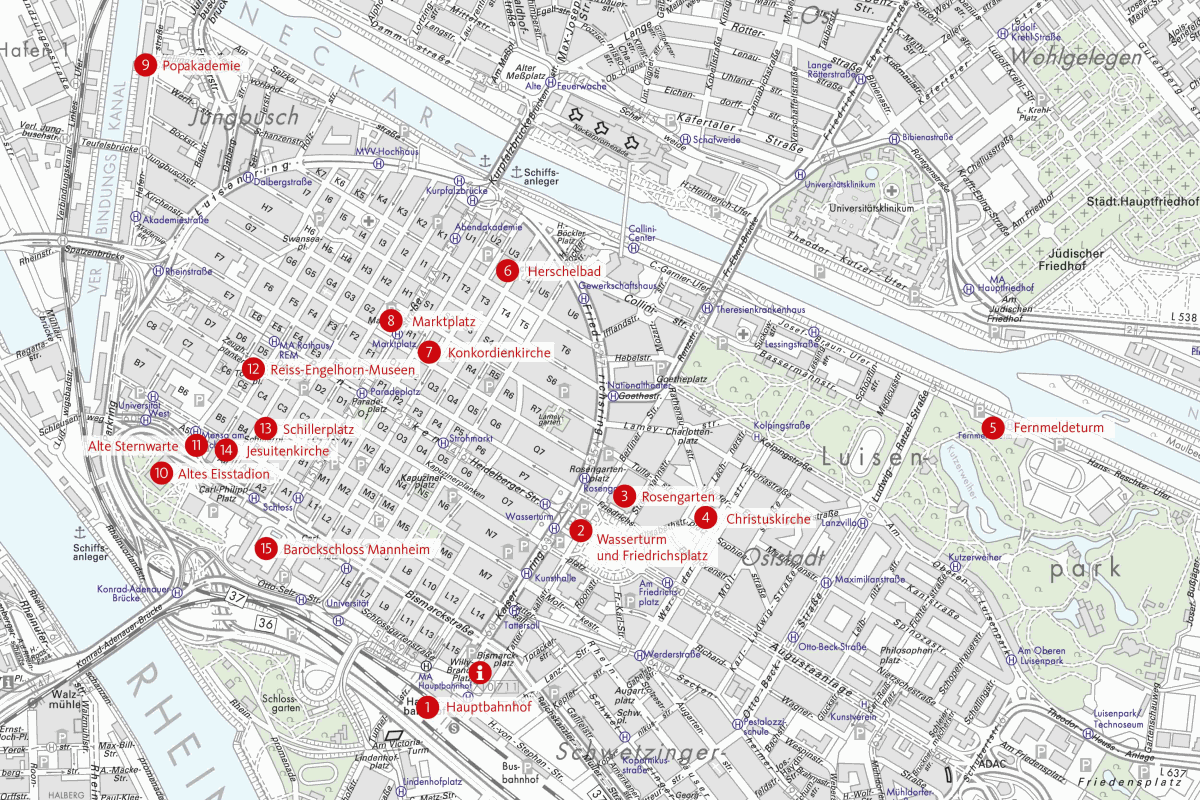 If you fancy cycling through the countryside and enjoy cycling along gravel paths surrounded by the sound of birds and the river, this is the perfect tour for you. The starting point is Mannheim Baroque Palace. From its courtyard, a road leads you directly through the palace park down to the Rhine. On the Stephanienufer, riding is easy and your bike will take you along the banks of the Rhine almost by itself. On your way, you will pass Mannheim’s Lindenhof district, where a lovely promenade under the old trees offers plenty of shady spots for a picnic.

The Stephanienufer then merges almost unnoticed into the extensive “Waldpark”, whose paths lead you either directly along the river or through the lush floodplain forest. Benches along the forest paths with views of wide meadows or running water invite you to linger before continuing along the “Bellenkrappen” – a branch of the Rhine – towards the lido. There you will find extensive sunbathing and play areas, badminton fields and barbecue areas, as well as the PURiNO restaurant. Before returning to Mannheim, you can enjoy a view of the water and then ride through the natural idyll back towards the city of squares. 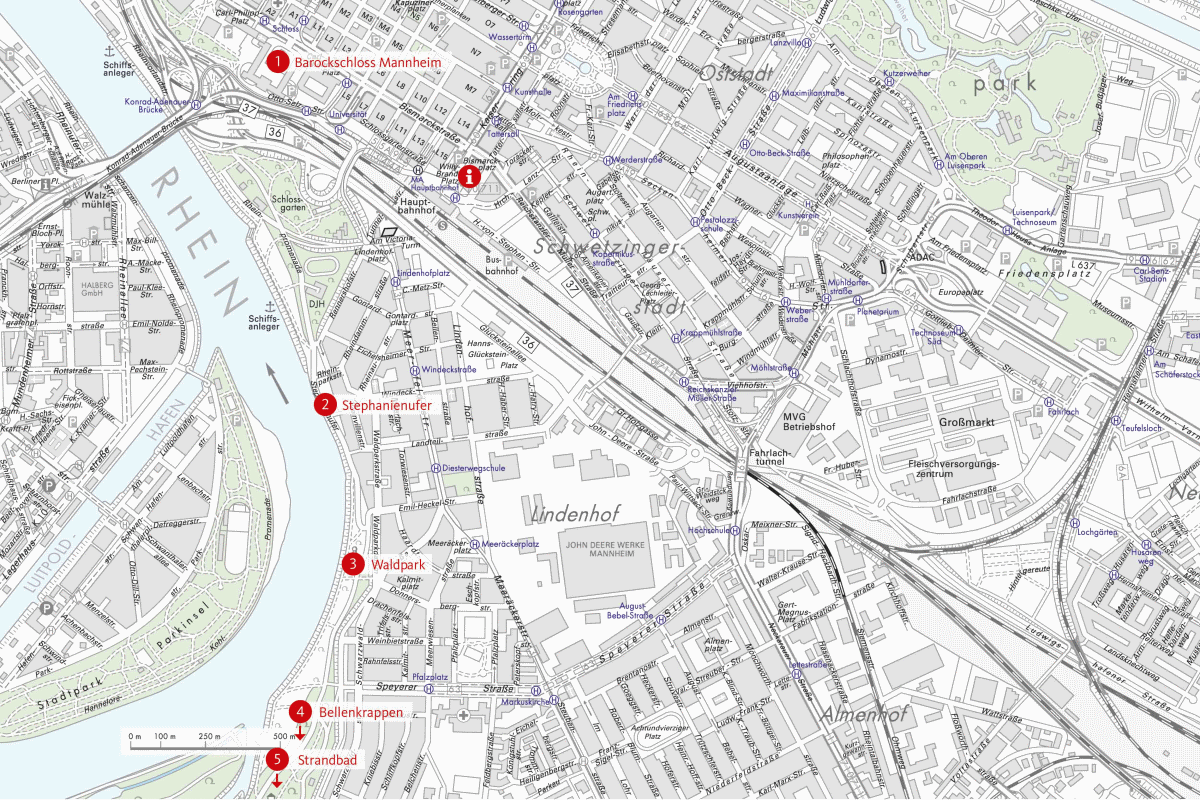 IN THE FOOTSTEPS OF KARL DRAIS

Following in the footsteps of bike inventor Karl Drais on two wheels is an opportunity you have only in Mannheim. The tour follows the historic route that the baron took on 12 June 1817 with his legendary “two-wheel running machine”. At the same time, it takes you to a series of exciting historical landmarks in and around Mannheim. We start in the spacious courtyard of the palace – the place where Karl Drais also started his journey. The first stop is the home of the inventor in the square M1, 8. Drais moved to the former capital in 1811 and only a few years later developed what was then known as the “Draisine”.

From there, the route takes you past the Reiss-Engelhorn museums to the observatory and then to the Mannheim Palace garden, which at the time served as a training and leisure retreat for users of the Drais running machine due to its well-maintained paths. From the main station, head towards the Schwetzinger Vorstadt district and over the high yellow bridge, the “Neckarauer Übergang”, to the Neckarau district. The Mannheim University of Applied Sciences is located there. In the tradition of Karl Drais it offers, among other things, studies in mechanical engineering, electrical engineering and equipment technology. After passing Neckarau, you will shortly reach Rheinau.

The outdoor pool is the ideal place for a well-deserved rest – or you can continue directly over the bridge to Hochstätt. From there, you return to Mannheim city centre through lush fields. Passing the SAP Arena and the City Airport, you will soon pass the Mannheim Technoseum (Technical Museum) and the planetarium. Next you ride through the Oststadt district, dominated by imposing villas, which offers numerous bars and restaurants for a cup of coffee and a piece of cake. After a final detour to Mannheim’s most famous landmark, the water tower, you will return – still in the tradition of Karl Drais – to your starting point: Mannheim Baroque Palace. 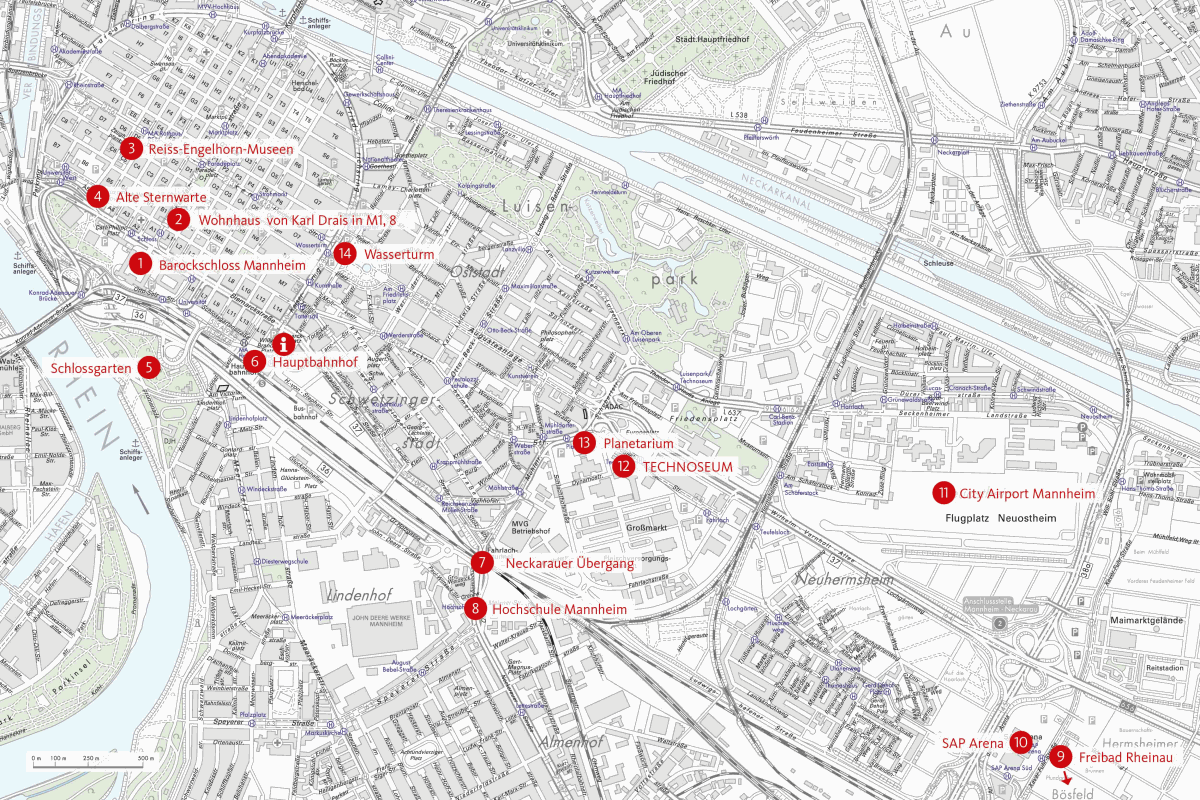 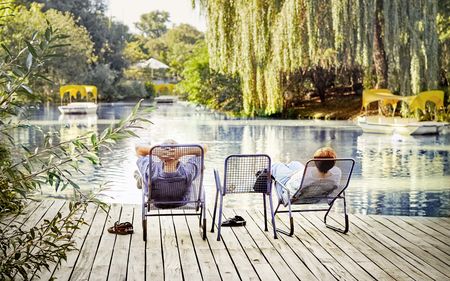 Stroll through forest areas in the middle of the city. Jog to work through the park. Look at tropical animals. Soak up the sun in the middle of one of Germany's largest and most complete Art Nouveau developments. Cycle along the Rhine and Neckar rivers. Discover a foreign world in the Chinese Garden. Exercise in the sports park... And all in one city: Mannheim. 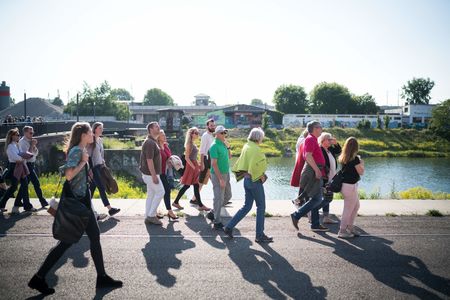 Let yourself be seduced by Mannheim – by its history, winding lanes, historic places and by the present day life of this diverse city on the Rhine and Neckar rivers. The modern metropolis can be experienced first-hand through a wide range of lovingly and individually designed city tours and round trips. 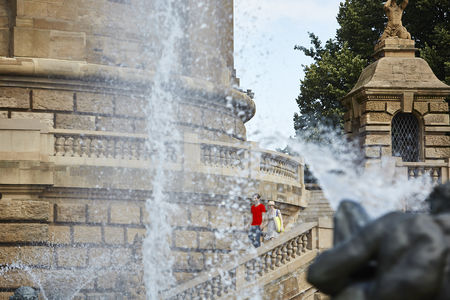 Things to do on a short break in Mannheim

Whether for three hours, three days or a long weekend, Mannheim is always worth a visit. Top attractions, easy access to nature, cultural and shopping highlights - there’s plenty to do, even if you’re only here for short time.